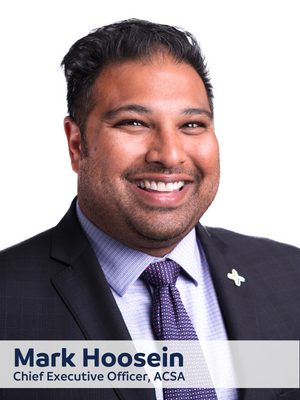 Mark Hoosein joins the Alberta Construction Safety Association (ACSA) as Chief Executive Officer (CEO). He brings experience in construction project management, safety, governance, strategic execution, and government and industry relations. Passionate about safety and collaboration, Mark has made both a focus of his work throughout his career.

Mark also served as President of the Alberta Public Housing Administrators Association and member of the Government of Alberta’s Housing Technical Advisory Committee. He holds a Bachelor of Arts in Economics from the University of Alberta and a Master of Business Administration from Royal Roads University.

Born and raised in Edmonton, Mark enjoys the outdoors and spends his downtime outside or at the pool. He met his wife when both were young competitive swimmers, and twelve years later, they have two young sons. They enjoy mountain biking, hiking, camping and gardening in the summer and skiing and skating in the winter.

Mark took on a new challenge while working from home in the past three years: learning to cook. He now makes a fantastic chicken parmigiana.